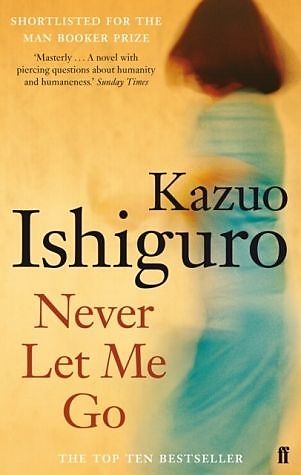 Beschreibung:  Never Let Me Go is the acclaimed bestseller by Kazuo Ishiguro, author of the Booker Prize-winning novel, The Remains of the Day and The Buried Giant. Now a major film adaptation starring Keira Knightley and Carey Mulligan.

The top ten bestseller from the Nobel Prize-winning author of The Remains of the Day Shortlisted for the Man Booker Prize In one of the most acclaimed novels of recent years, Kazuo Ishiguro imagines the lives of a group of students growing up in a darkly skewed version of contemporary England. Narrated by Kathy, now thirty-one, Never Let Me Go dramatises her attempts to come to terms with her childhood at the seemingly idyllic Hailsham School and with the fate that has always awaited her and her closest friends in the wider world. A story of love, friendship and memory, Never Let Me Go is charged throughout with a sense of the fragility of life.

Portrait:  Kazuo Ishiguro's eight books have won him world-wide renown and many honours, including the Nobel Prize in Literature and the Booker Prize. His work has been translated into over forty languages. The Remains of the Dayand Never Let Me Gohave each sold in excess of one million copies in Faber editions alone, and both were adapted into highly acclaimed films. His most recent novel, The Buried Giant, was published in 2015, debuting at number 1 on the Sunday Times bestseller list.